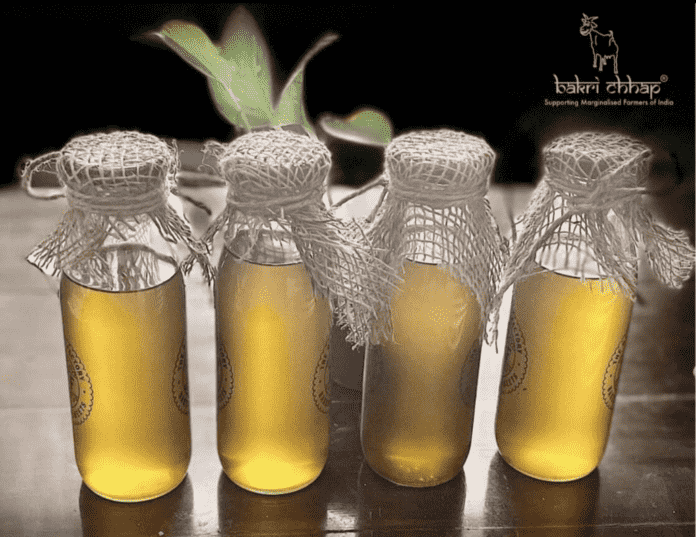 Bakri Chhap is a pro planet, pro people and for-profit organization committed to integrated rural development. With sustainability being our religion, minimalism our governing philosophy and reduce, reuse and recycle being our holy trinity, we plan to carve India’s next success story, straight from its villages.Founder, Roopesh Rai

Sustainable development refers to human developments that meet our current needs, without undermining nature’s ability to provide for the generations to come. But how many actually come out of their comfort zones to speak out and act? Roopesh Rai did just that.

There’s always an ‘idea’ in ‘idealism’ & Roopesh wears his idealism on his sleeve without fear or apology & calls himself a “Farmer by Soul, Chef by Heart and Brand Engineer for Living”.

There is always some moment in life that compels you to change your path. Destiny took him to visit Kedarnath just after the cloudburst in 2013. Deeply affected by the scenes of death and destruction, he walked away from his ‘working life’ in 2014. He was working with leading hospitality and tourism organizations. He left it all, “to do something pro-planet, pro-people, and for-profit”. Misuse of the natural resources and their impact on the ecological imbalance, made him look inwards, and reach outwards to do something to bring about change.

After the Holocaust, there were nearly 3000 ‘ghost villages’ where local farmers had migrated to cities looking for survival, leaving behind their traditional methods of farming and their heritage homes.

His experience, in the hospitality and tourism industry, encouraged him to create a new model of tourism which included the revival of the old profession of local farming as a source of income, along with sustainable tourism. If these villages would become self-sustainable, it would lead to reverse migration.

Who would know that his trek uphill looking for Goat milk to make goat’s cheese would lead him to a shift in his life goal.

This project did not take off as the goats were not milking enough, but that did not stop him from looking for a “social engineering solution that also made good business sense”.

Along with capacity building and market linkage. He began selling indigenous farm products under the ‘Bakri Chaap’ label. They work with nearly 150 farmers directly and about 500 plus farmers indirectly across 45 villages and have been striving to provide fair trade prices by eliminating middlemen & providing quality products to leading retail stores, e-commerce, and upscale hotels in India & working in close co-branding and marketing collaborations with volunteer celebrity chefs, wellness experts & bloggers from metropolitan cities.

Bakri Chhap products carry the fair price label depending on quality and supply. This is one of the only organizations which has reverse traceability of the product. This helps to build trust and transparency and bring back the FMCG customer for repeat purchases.

When you cannot fight against the system, it is best to find a way around the problem. And that is what Roopesh did. Earth is fragile and plastic pollution cannot be tackled, on a war footing.

The solution was to reuse the existing used plastic bottles and containers to pack the farm produce. This helped in recycling plastic waste and upscale reuse. The evil was dealt with !! a robust move.

Roopesh states that “his company is committed to integrate rural development with sustainability being their religion, minimalism their governing philosophy and reduce, reuse and recycle being their holy trinity.”

I was intrigued by the name,’ Bakri Chhap and Goat Village’.

Roopesh explained – “The vision is to protect the heritage, culture, agriculture, & horticulture of Small, Micro and Marginalized Farmers (SMMF) of rural India, the Himalayas to begin with. The livestock which is the goat and sheep is an intrinsic part of the livelihood of SMMF in the Himalayas. “

Their success mantra lies in finding sustainable solutions to the problems and they did not move away from the application of green “earth-friendly” principles.

These helped revive the traditional, climate-proof Koti Banal architecture which is a 1000-year-old technique of housing structure that helps the home sustain any kind of disaster, like an earthquake, tremors, etc. This soon became a tourist attraction and within a few years, this venture had a footfall of 90,000 tourists.

But what caught the imagination of young urban travelers, in particular, was his Pay As You Like model.

He bypassed the issues of high expectations and low returns by offering these simple humble homestays to those urbanites, who understood the ground reality and willingly wanted to spend time in villages, along with offering their skills. Expectation management was the way out. The guests came with minimal expectations and they were asked to pay as per their level of satisfaction. This became an extremely popular form of travel and attracted genuine conscious travelers who were conscious of their carbon footprints. They actually got involved with the local families, their farming techniques, and local festivals. This led to community mobilization and a huge turnaround in revenue for that region.

Both these initiatives were extremely successful, smashing the norms of our patriarchal society.

Roopesh realized early during his tourism days that most of the tourist load is focused on popular tourist sites. 75% of tourists choose these locations and add to the already existing pollution issues. Most regions do not have the infrastructure and facilities to manage this overload of footfalls. He felt a solution could be found in this tourist traffic could be diverted to other regions and this would average out the impact and inflow. Plus, the revenue generated through tourism would also be distributed fairly across states.

This idea led him to weed out various local village harvest festivals and religious festivals which will attract national and international environmentally conscious travelers. These festivals would involve the community, and ad revenue for homestays and local dhabas (local cafes), local transport vendors, shopkeepers, and farmers’ courses.

This is how the Bakri Swayamvar (or a call for suitors for nanny goats) and Ghasyari Festival (grass cutting festival) were launched. The Bakri Swayamwar or Goat marriages were celebrated in a Goat village named Pantwari near Nag Tibba in Uttarakhand.

The purpose was to have goat breeding amongst different villages and gene pool improvisation of the cattle, which increased lactation and quality. This turned out to be a huge crowd puller and more than 3000 tourists were added every year.

The youth from these villages were trained at five-star hotels, in all the departments and then placed in these home stays at the competitive salaries applicable in the hospitality sector. This changed the standard of living for hundreds.

The organization has a ‘Women’s team which is unique for this region. There are several women guides who became popular among the tourists.

In less than 5 years, the area of operations has seen a paradigm shift -70 fold increase in footfalls, from only 1,200 annual participants to 90,000 trekking/ tourism enthusiasts in a year.

Roopesh Rai and his Bakri Chhap projects won many accolades.

To mention a few of them:

World Responsible Tourism Awards, under the category, – ‘Best For Benefitting Local People’ This institution was the only one to be shortlisted from the country.

Nationwide Incredible India Billboard Campaign by the Ministry of Tourism, India, where The Goat Village was the poster boy for Uttarakhand Tourism in January 2021.

World Travel Mart, London December 2019. Roopesh and the team have been working on some future plans.

They have been pioneers in creating thematic villages. He plans to build 20 new hideouts and 2 new eco villages in the coming year.

His vision is to reach most villages of India with new innovative concepts like Urbanizing farming, creating alternative ecosystems, and asset management of rural India. Hyper-local is a new luxury- says Roopesh.

He has been a trendsetter, broking old shackles, to solve problems with innovative solutions, which will have a long-term positive impact on the environment and future generations. He is a true change maker and we salute such heroes.