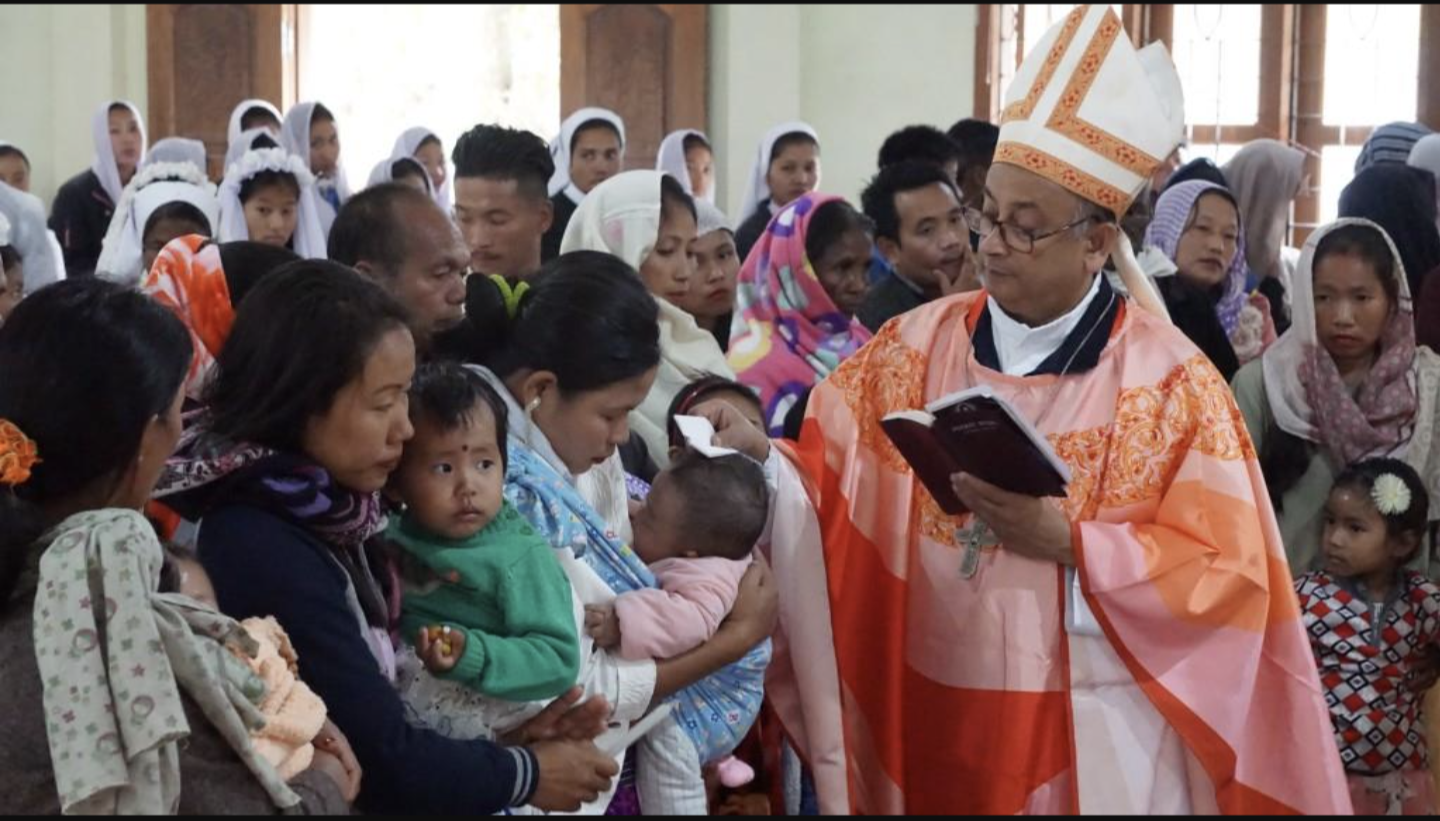 SalamatRaho presents to you the story of Bishop-Pallipparambil George. A young man from Kerala found his goal, his purpose of life in Arunachal Pradesh, just to serve the neediest.

‘Selfless giving is the art of living’ says.- Frederic Lenz

While we focus a lot on self-improvement, an important part of living a happy and fulfilling life includes being part of a community where you can share, help, and support the people you care about.

It’s easy to get so wrapped up in fixing your own life that you forget about helping others. And while it’s important to put yourself first sometimes, it’s even more important to help others whenever you can.

He was born on 15th May 1954 at Thattarathatta, a small village in Thodupuzha of Kerala. His parents Mr. Korah and Anne had five children, 4 boys and one girl. An average middle-class family, the parents were hard working and taught the children to live an honest life.

The initial schooling was done in the village and then high school in Karimkunnam, and he walked up and down 5 km. daily. By then he was already interested in becoming a missionary in North East India. Having the advantage of a huge library In his village, most of his free time was spent with books.

The inclination he had to go far away and work among the less fortunate people was all the more propelled into action as he read the lives of great people and the speeches and exhortations of many leaders of the world.

Being a traditional Catholic family, and an almost totally Catholic area, the church was the main  place for socialising  and meeting of minds.

His family were farmers and cultivated what they needed hence he was closely associated with ground reality and well aware about protecting the environment. Local newspaper was the only source of connection to the fast changing outside world.

The interaction he had at various places and levels planted in him the desire to do something for the society. But he was determined not to remain in the locality, as that would restrict his freedom of action. It was when he was in Class VII that he first read about the possibility of joining any Religious organization and serving others. Accordingly he gave his name to join the Montfort brothers in Andhra Pradesh, but was not allowed at that age.

When in high school, he heard and read about Assam ( the whole North East was known as Assam at that time)and its challenges and adventures. He decided that after Class X, he would leave for Assam.

On 25th June 1970, along with 14 others, young George left for Shillong at age 16.It was a long break journey for this young adult, leaving his family behind. Crossing Madras to Calcutta to Gauhati then reaching Shillong after 5 days.

He completed his 12th and then left for Sonada near Darjeeling  to complete the Degree course as well as a diploma in Indian and Western Philosophy. Salesian College, fortunately, had a big library and a section with a lot of books on the North East.

After graduation, he returned to the North East and was sent to teach in various schools. He also studied theology in Sacred Heart Theological College which also had a huge library.

In 1981 when he had to do his research paper, he chose the religion of Arunachal Pradesh as his subject.

During his stay in Shillong, one burning issue which bothered him was the absence of good schools and the very pathetic education system in Arunachal at that time. He was determined to bring in change.

The service that one renders in this walk of life as a Catholic Priest or Religious is nothing but a life of dedication. His or her thoughts must stretch far beyond oneself or one’s family or the narrow circles but reach out to anyone in need.

“Illiteracy, illness and violence has no religion, and  borders; we all need to join hands to combat them ”Says Bishop George.

Incase you are interested in travelling to Arunachal Pradesh, Read this:

He continues to say that “a life of dedication can seem to be a great sacrifice, if one is not fully motivated. But for one with motivation and universal love, it becomes a privilege to serve people and to bring to them the comforts of life and the most fundamental joys of life. When one misses that dedication and universal love everything becomes painful and they begin to count the cost.”

When asked, what inspired him to leave the path of a married life and family and follow a path of service, he says,” If one looks at marriage as just constituting a physical family with its comforts, joys and troubles, one can feel the absence of it in a life of service like this. But if one is able to see humanity as a family and enjoy the company of others, the absence of it will never be felt or resented. “

The process of being inducted into this service was not easy. At the beginning of 1983. He went to Tinsukia in Assam and started a residential school. Started from  Class VI and had to literally have to start with ABCD. They included a regimented system of classes, sports, healthy meals and then listening to BBC radio before sleep. This worked for their benefit.

There were depressing moments: not having money in hand, the rough nature of the fresh arrivals etc., were discouraging. At the same time, the reality in the villages and the help needed in order to transform the society, kept him going without giving up.

He felt  that “Service to others is the rent you pay for your room here on earth.”

He soon came to be known as Fr. George in that region. He became more and more involved with the villagers. Youngsters and elders. In fact in 1994, he took a group to Philippines, Hong Kong and Thailand as features were similar. It did have a magic effect on them. Their minds opened up with the exposure and they were willing to change and get rid of superstitions and old beliefs.

Initially, children born with some birth defects were killed immediately as they were looked upon as freaks of nature. He decided to take such babies at birth in his own centre. He met Mother Teresa in 1992 and due to his request, she sent four Sisters to help the people of the area and to run this life saving institute. The new born were well taken care off and some were even given for adoption. In about four years, no one abandoned such children. He succeeded in this mission to save hundreds of babies by just changing their mind-sets.

He was on a mission to upgrade the life of the people of this region. There were villages where dead bodies were kept in the village on a bamboo platform and not buried or cremated. This had a very high impact on the total hygiene in the village. He succeeded in changing this practice along with his students and today, all have changed over to burial.

Seeing the change the young people were making, village after village started requesting him to open schools for them in the villages.

There are about 16,000 students under his care. There is a degree College which gets the best results in the state which he overlooks.

There are 34 hostels for boys and girls so that children from far off villages can study.

A vocational training centre for girls is helping many to learn and take up various occupations like beautician and hospitality courses.

A hospital and 17 dispensaries that he runs in the villages are real places of hope for the people. Large number of village level health workers are trained and equipped. The doctors from the hospital  regularly conduct health camps.

The hundreds of Self Help Groups (SHC)and their impact on the villages is noteworthy. As banks are not easily available, his staff take a lot of trouble to open accounts for the villagers and for the SHGs.

In order to facilitate all these activities, they formed a number of NGOs.

Seva kendra Arunachal East looks after all the social and development aspects.

Newman Educational Society looks after all the matters connected with education.

Agency for Culture, Human Resource and Environment Development (ACHRED) looks after the preservation and promotion of local cultures and dialects.

These are well appreciated by the government and the public at large.

In July 2018, he was awarded the Bharat Gaurav Award in the house of commons in London.

In the same year on December 10th, he was awarded for rural education by the International Human rights organization,  New Delhi.

There are still lots to do, says Bishop George.

He wants to change a lot fast, but hands are tied due to shortage of funds. He is trying his best to raise as much as possible through CSR funds or Govt funds

What Bishop George would like to do is to replicate plans in different towns. Needs a  hospital and nursing training centres in villages as they serve the village and get better jobs in cities.

As agriculture, horticulture and other activities are picking up, a good marketing network is being planned and being worked on. He also intends to start food processing units. Tailoring courses for married women, with the help of USHA group, which supplies sewing machines to the trainees after the completion of the course.

A cultural centre that is just getting completed will be a unique landmark for this region.

They have been able to publish basic grammar in two dialects. He hopes to do more in this field.

He says, “I keep repeating to the youth and my co-workers, -look beyond the mountain, fly high, the sky’s the limit”

Team NomadLawyer salutes the story of a  little boy from Kerala who decides to dedicate his life to serving humanity, goes all the way to villages in Arunachal Pradesh and, today serves thousands and wins hearts of his people, adulation from his colleagues, recognition and awards from the State government National Government and International boards.

The sacrifice made by Bishop George so that he could serve his people and his country selflessly, makes him a role model which India should be proud of. Kudos to our silent heroes.!!

TELL YOUR STORY AT:  [email protected]

Team NomadLawyer’s ambition is to positively impact the world through the stories of HumanKind. We believe in the art of storytelling. Through “Salamat Raho ”, we are creating a database for social good in the form of “Impact Stories”, which will help us achieve our goal and reach out to the world at large. By contributing through your stories and experience you create a significant impact on the community and an exceptional experience for yourself. Visit the NomadLawyer portal at nomadlawyer.org and you can also get in touch with us at [email protected]

We use hashtag #SalamatRaho for the series