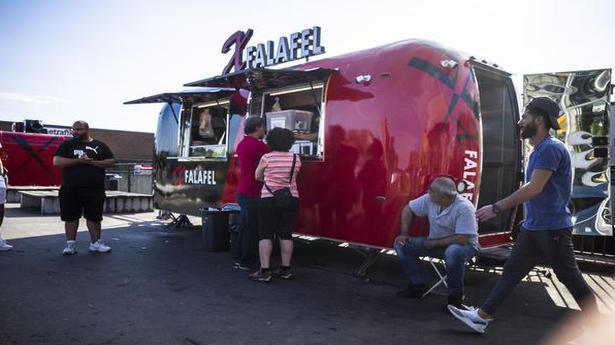 Though the midsummer was gone, the idea of barbecuing out in the open with friends has stayed

After a long wait, summer officially arrived in Sweden a few weeks ago. And when it did arrive, it came with a vengeance. Temperatures soured to the early thirties, and in a country not prepared to cope with even this mild heat, it meant more sale of table fans. However, no one is complaining, for the winter was horribly long.

Summer in Sweden means being outside. These are few weeks of the year when the city parks brim with people. On one such summer day, I decided to walk across to Slottsparken, the central park of the city of Malmö, where I live. The park gets its name from Malmö Castle (called ‘Slott’ in Swedish) that sits on the edge of the park.

At the entrance of the park, a long queue formed outside a kiosk selling falafels and ice-cream. Sweden has witnessed an influx of refugees from war-torn Syria, Lebanon and other West Asian countries in the last two decades. Many of these refugees have made Malmö their home. Their presence has translated into the many falafel kiosks that mark the streets and nooks of the city. The locals love falafel so much so that it won’t be an exaggeration to say that it is the city’s favourite food now.

As I walked inside the park, I noticed several groups playing kubb, which is a lawn game where the objective is to knock over wooden blocks called kubbars. The game is won by the team that manages to knock over most wooden blocks of the other team and also a centrally placed king-pin. The attractiveness of the game comes from its simplicity and that any age group can play it. Moreover, it’s a game that’s only played in the lawns.

As I walked further, I saw several groups gather for picnic. The smell of burning coal and charred meat wafted across.

These groups had gathered over portable barbecue units on which hot coal simmered. Midsummer Eve had just passed by (on June 25), and unequivocally the tradition of midsummer is to go outside, grill and wash it down with snaps. Though the midsummer was gone, the idea of barbecuing out in the open with friends has stayed. Laughter, punctuated with the mild hiss of charring food and pops of soda bottles being opened, filled the air.

While I walked, paddle boats dotted the canal that meanders through the park. A small group of runners sped past me. Most Swedes prefer an active holiday; the sunny afternoon presented a perfect opportunity to catch up on some exercise. As I turned a corner, I stumbled across a tiny cart on wheels selling coffee. These portable units move around the city selling coffee and given the rush in the park at this hour, it had found an ideal place to anchor.

I bought a coffee and settled on one of the many benches in the park. I was carrying a book to read. After a long walk across the park, this bench, the freshly brewed coffee and the book made for a perfect company with which I was happy to while away the summer afternoon. Could I have asked for more?