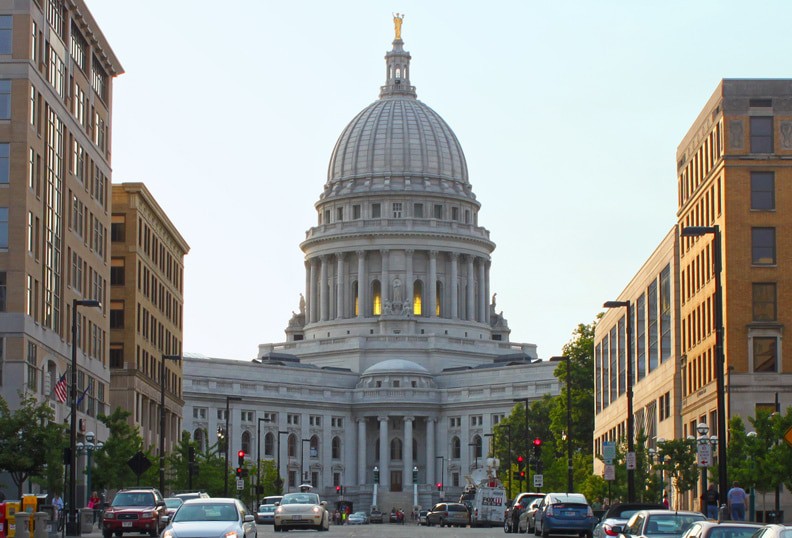 Wisconsin is bordered by Lakes Michigan, Superior and other beautiful landscapes. Large stretches of hills to the west and north are ideal for mountain biking and hiking, while the lowlands to the east and south have been excellent for dairy farming. The beaches in summer are the most visited.

Many of Wisconsin’s most popular cultural attractions can be found in the two largest cities, Madison, and Milwaukee. There are many other exceptional cultural events and activities in Wisconsin, including the massive Oshkosh Airshow, as well as Milwaukee’s Summerfest.

Oshkosh, a small town on Lake Winnebago northwest of Milwaukee is known for its popular line of children’s clothing and its position on the international airshow circuit. Since 1970, this is the site of the largest gathering of aviators in the world, EAA Aviation Oshkosh.

The Oshkosh control tower is the busiest place on the planet during the week-long event when up to 15,000 aircraft from all sizes descend upon it. An estimated half million people visit the airport each year to witness thrilling aerobatic displays and fly by vintage and modern military aircraft.

Evening flying displays, nighttime movie and theatre performances, as well as educational workshops, are all great experiences. There are many aircraft rides available, including one aboard a massive B-17 bomber. The EAA AirVenture museum with its 200+ aircraft collection is also worth mentioning.

Frank Lloyd Wright was one of the most influential people to call Wisconsin home. Many of Wright’s great designs are still visible in the state where he was born, and where he spent most of his adult life. These include the stunning Monona Terrace Community and Convention Center at Madison‘s shore (it was built after his death, but was based off his original plans), and Milwaukee’s Annunciation Greek Orthodox Church.

Most people flock to Taliesin East, Spring Green – often referred to as “Taliesen”. This magnificent home is situated on 600 acres of rolling countryside. It was built in 1911. Wright died in 1959. Wright spent summers here before he packed up and moved to Taliesin West in Scottsdale, Arizona in winter. This is still something that students at Taliesin’s School of Architecture do each year.

Guided tours of the school, home, studio, gallery and theater are available. A visitor center and restaurant are other highlights.

Madison offers many great reasons to visit. Many of the top attractions can be found in the downtown. The Wisconsin State Capitol is one of the most beautiful. It was completed in 1917 and decorated with a dome measuring 284 feet high, which is just three feet shorter than Washington’s Capitol Building.

Daily, one-hour tours of the building are free and include many of its best features. These include its beautiful murals, marble work and elegant rotunda, which houses its states and monuments. The sixth floor also houses an informative museum that explains the building’s history. It is worth visiting. The Frank Lloyd Wright-designed Monona Terrace Community and Convention Center offers stunning views of the capital.

A Harley-Davidson motorcycle is the ultimate symbol of freedom. This fact is well-known to Milwaukeeans, who are the originators of the “Hog.” You can learn more about this legendary machine at the Harley-Davidson Museum in Milwaukee, which houses more than 450 classic motorcycles.

The attraction is a fun family attraction that features excellent displays of the brand’s teardrop tanks and exhibits telling the stories of the people behind them. A Harley-themed restaurant is also available. Try to plan your visit around one of the museum’s “bike nights”, when owners and fans flock in large numbers to admire and show off these iconic machines.

The Circus World Museum, located in the small town Baraboo is a great attraction for children of all ages. It teaches about the daily activities of a working circus. The museum has many fascinating exhibits and displays that focus on the rich history of circus in the United States.

According to legend, the museum houses the largest collection of circus-related artifacts in the world, including posters and parade wagons. The museum also hosts a Big Top that offers regular performances, including traditional circus acts. Check their website for a schedule. Baraboo, which was once the headquarters for the massive Ringling Brothers Circus, is well-suited to host the museum.

The Dells of the Wisconsin River

The Wisconsin Dells are sometimes called the “Wisconsin Dells”, though they are often mistaken for the touristy resort of the same name. The five-mile-long Dells of the Wisconsin River is the state’s largest river. This area is a natural wonder, with many unique sandstone rock formations and canyons. Some cliffs are as high as 100ft.

The area of the Dells is home to a variety of rare flora, fauna, and plants, including cliff cudweed which can only be found in one other place on the planet and six species dragonfly species. It is difficult to reach due to its fragile ecological condition. Those who wish to see its beauty must travel by boat. There are many boat tours and excursions that take you to the most beautiful parts of this region.

Door County is one of the most beautiful parts of Wisconsin. This area is located 46 miles northeast from Green Bay and boasts outstanding natural beauty. It’s situated on a peninsula that overlooks Lake Michigan. It has been a popular tourist spot due to its numerous charming hotels and its abundant campsites.

Door County is home to some of the best Wisconsin small towns. These include the charming Sturgeon Bay with its beautiful old lighthouse (one among many such structures scattered across Wisconsin), and Ephraim with its old harbor and historic buildings. Washington Island has the oldest Icelandic settlement in the country and is worth a visit.

The Green Bay Packers’ story is an amazing tale about how a small town can host a professional team in major league sports. The stadium is the centerpiece of the team’s operation. Lambeau Field, which is nearly large enough for 72,000 people, was built in 1957. It remains the longest continuously occupied stadium of the league.

The team was founded in 1919 and is the third-oldest in the NFL. It’s also the only non-profit league team (it’s owned locally by Green Bay). You can enjoy a tour of Green Bay Stadium with its behind-the scenes look at major league teams, regardless of whether you are a sports fan.

You should also check out two excellent self-guided tours of Packers-related landmarks: The Walk of Legends, which is an art path of 24 statues that celebrates the history of Green Bay football between 1895 and present (and fun to explore at nights), and the Packers Heritage Trail, which is a walking tour that takes in landmarks in the city associated with the team.

Explore the Land of Lakes

The beautiful Land o’ lakes region lies between Eagle River, Boulder Junction and Rhinelander in northern Wisconsin. It is a popular spot for watersport enthusiasts with more than 200 unspoiled lakes.

The region is popular with backpackers and campers, who love to kayak or canoe it. Its abundant flora, fauna, and good fishing are some of its highlights. You may also be able to spot one of the few white-tailed eagles remaining in the region.

The town of Eagle River is a great place to start exploring the area. It offers many activities, including fishing, boating and biking in summer and cross-country skiing in winter.

The Badger State is well-known for its dairy products and cheese, but it also has many natural wonders. Because of its many beautiful waterfalls, it’s a popular destination for outdoor enthusiasts and hikers. Although some waterfalls are located in remote areas, most are easily accessible from major cities.

Copper Falls State Park is one of the most visited Wisconsin waterfall destinations. This beautiful park, located just a few minutes north of the small town Mellen is home to three waterfalls. The Waterfall Trail is an easy hike that can be done by anyone, including Brownstone Falls at the park’s northern end.

Red Granite Falls is the third waterfall and well worth a visit. It is located at the park’s southern end. Copper Falls State Park has 17 miles of hiking trails that can be explored by those who want to spend the whole day.

All Steam Up at the National Railroad Museum

The National Railroad Museum in Green Bay is a great family outing. The museum is home to over 20 steam and diesel engines and many pieces of rolling stock. It also houses a wide variety of railroad memorabilia and artifacts.

The Eisenhower collection is a highlight. It includes the Dwight D. Eisenhower. This vintage British engine was used to pull the leader’s military train across Europe during WWII. Enjoy excursions on a train decorated like Thomas the Tank Engine and haunted train rides during Halloween. The museum’s collection can be seen from the observation tower, which is 80 feet tall.

Hiking or biking across Wisconsin’s vast trail network is a great way to see the wonders of Wisconsin. This activity is becoming more popular among backpackers who are looking for an adventure outdoors. Many trails in Wisconsin offer a glimpse at the effects of glaciation on landscapes. The Ice Age Trail is an incredible 1,000-mile-long National Scenic Trail that runs from Potawatomi State Park through St. Croix Dalles.

There’s also the North Country National Scenic Trail, which runs through Wisconsin for 117 miles. It covers North Dakota and New York. The Geneva Lake Shore Path is a gentler, more pleasant hiking trail that passes through many of the state’s most beautiful country estates. Allow at least one day for the whole route.

The House on the Rock

One of Wisconsin’s most unique tourist attractions is the House on the Rock. It’s located high above Deer Shelter Rock in Spring Green and houses a variety of antiques and oddities in a complex of structures that was designed to imitate Frank Lloyd Wright’s Taliesin Easthome.

The Infinity Room is 218 feet long and seems to disappear in the distance. This attraction is part of a larger complex, which also includes a resort as well as an inn.