THE TIMELESS BEAUTY OF DARBARGARH PALACE AT MANSA, GUJARAT

Through this blog we will bring to you the historical significance of Darbargarh palace. Gujarat has many places where history lies and let’s uncover one today.

India through its abundant pages of history has been a patient host to numerous layers of ethnicities, arts and traditions. Various people have come and gone to and from this vast land. They have left behind them a spectrum of rich and varied heritage that one can learn from and develop for centuries to come.

In a similar manner, during the pre-independence era, the rulers of the princely states have been instrumental in adopting foreign styles of art and architecture, and blending them with the indigenous environs. One such example is the Darbargarh Palace complex, the residential abode of Chavda dynasty who had ruled northern Gujarat from 7th to 10th centuries. Their descendants ruled Mansa, a princely state under Mahi Kantha Agency during British rule. Today, it is a part of the Gandhinagar district of Gujarat.

Map showing the location of Mansa

Darbargarh Palace Complex has three main components – the Indo-European Sajjan Vilas Palace, Zanana Mahal in traditional Gujarati style and Purani haveli, the earliest known structure on site. The palace complex is modest in scale yet significant to comprehend the amalgamation of vernacular style with the then trending British style. Adaptations in architecture due to transforming lifestyles and exchange of ideas have brought about synthesis in the built form.

The residential palace of the Chavda family is an architectural gem in the otherwise urbanizing surroundings of the present day Mansa taluka. It is not only a family heirloom but also symbolizes the might of the Rajput rulers of the bygone era. Guarded by high compound walls on all sides, Darbargarh Palace complex comprises of numerous structures built over a period of time. And because of this very reason, all the structures differ in their methods of construction as each one reflects the period in which it was built. 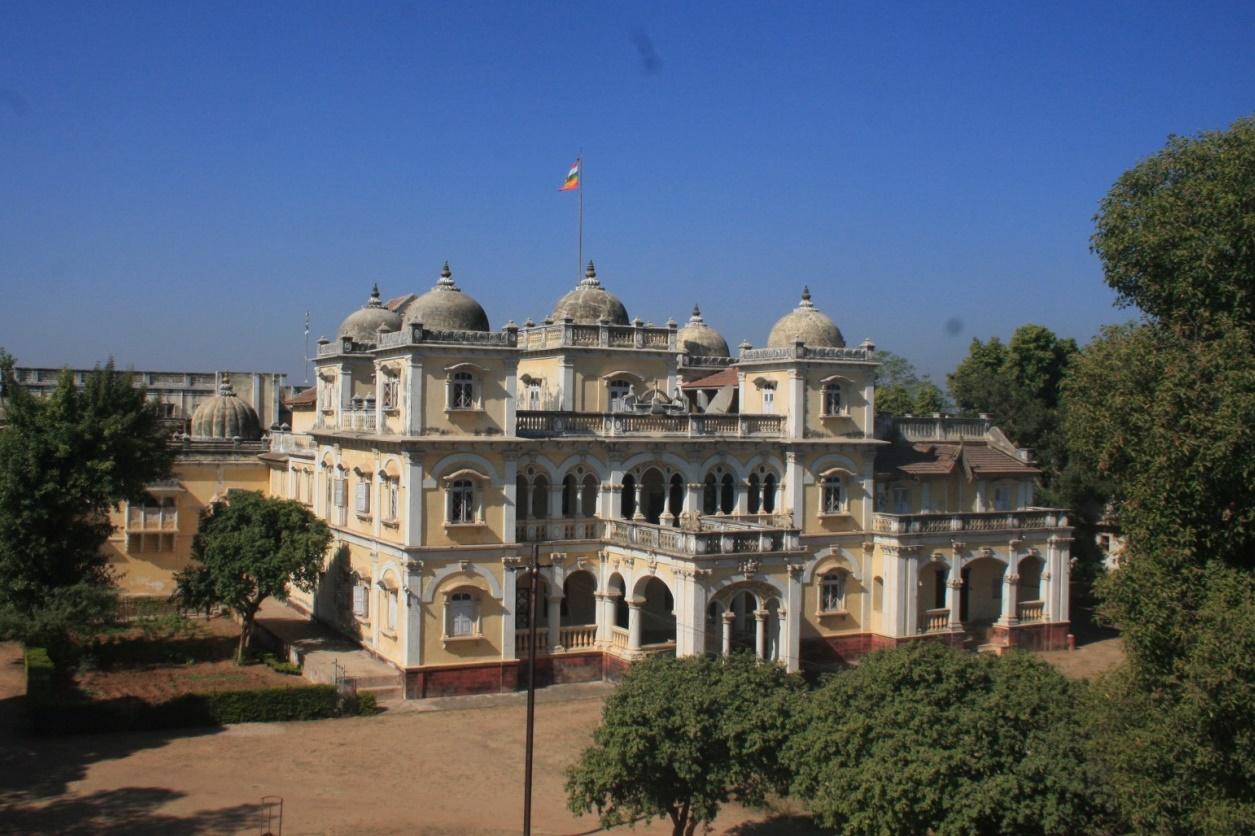 The most recent structure is the Sajjan Vilas Palace constructed in 1920s, the private residence of the royal family with European influence in the elevation. The traditional Gujarati haveli which served as the Zanana Mahal is a much older structure which is partially connected to the newer palace building.

To the northern end of the Zanana Mahal are the ruins of the very first residential building on site perhaps built in late 16th century, known as the Purani haveli. These three buildings are juxtaposed around two courtyards. On one hand, these courtyards act as architectural buffers between the habitable rooms to keep out the harsh climate in this dry region while on the other, they act as gathering spaces for formal or otherwise guests during festivities or ritualistic occasions.

Apart from these, the other important structures of the complex, abutting the high boundary wall are the Takhat Bhuvan- the administration block with the accounts offices and the Vanraj Bhuvan – the house for the state guests. Each of these residential spaces has a distinct character and yet blends perfectly with the other entities in the complex.

Let us look at these individual structures which create an architectural and cultural collage within the palace complex. Guarded by high boundary walls on all sides, Sajjan Vilas Palace is a modest sized building. It is in the midst of an open space which can be accessed from the main road through an arched gateway.  The two storey main gate structure is adorned by floral keystones, balustrades and frieze bands, which hint the presence of Indo-European influence in the palace beyond this gate. Entering through the main gate, along its axial symmetry the approach road leads us to a majestic structure with an inviting porch in the center. Sajjan Vilas Palace is a synthesis of European and vernacular styles of architecture. It displays a sense of balance in the visual character of the palace complex. 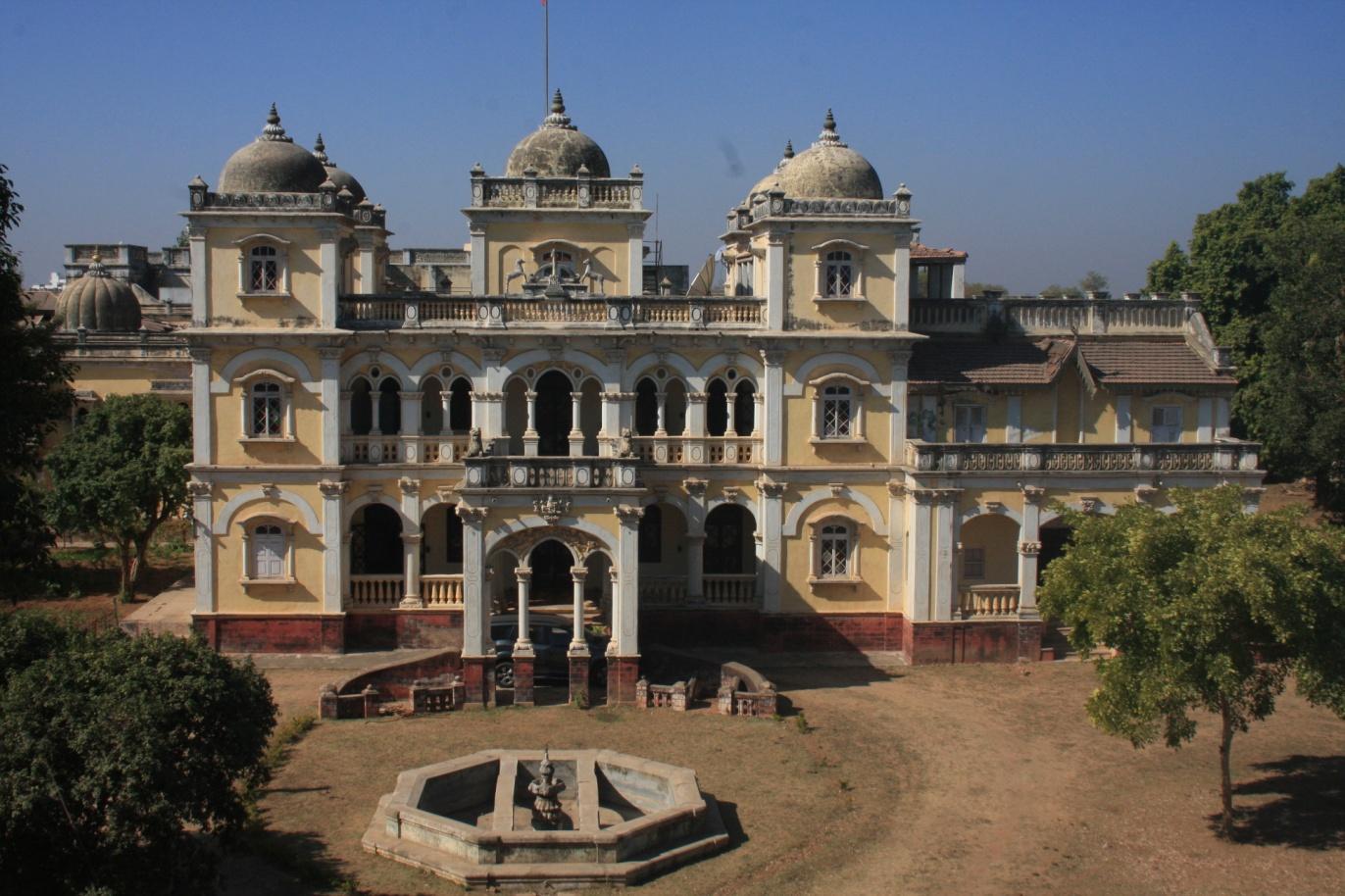 Sajjan Vilas Palace in front has predominantly European elements in its elevation- the semi-circular and pointed arches on ground and first floors respectively, ornate floral column capitals and bases etc. The entire front façade is symmetrical except for the additional wing of Darbar Hall along the northern side. Very peculiarly the Darbar Hall is situated on the first floor; unlike most of the palace buildings. The building has a composite construction system with load bearing brick masonry, jack arch flooring and domes on the topmost level capping the royal ensemble. Mangalore tiled roof can be spotted over few passages and balconies sensitively complimenting the rest of the roofscape. Once inside, the multitude of openings ensures natural light and cross ventilation. Coloured glasses in window panes and chandeliers enrich the quality of filtered light. The vivid patterns of minton tiles in most of the habitable spaces give a touch of elegance throughout. 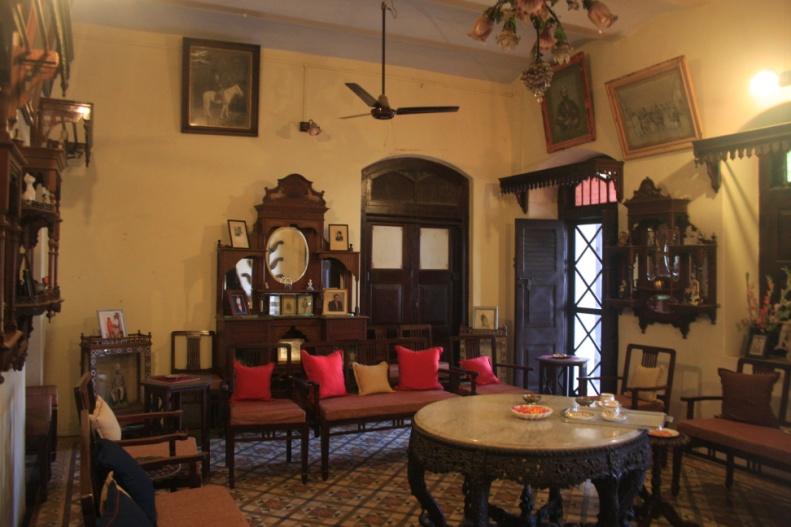 Zanana Mahal, the ladies’ quarters situated on the southern side of Sajjan Vilas palace is typically in Gujarati haveli style. It has a separate entrance gateway dedicated solely to the royal ladies. The entire structure is recessed from the line of elevation of Sajjan Vilas palace which gives it a very discreet identity. The recessed entrance gateway with its ornately carved wooden balcony and jharokhas above opens into a courtyard. Climatically responsive passages serve as a transitional space between the courtyard and the inward facing private residential quarters. Although the building stands vacant today, it speaks volumes about the days when it must have basked in splendorous glory.

The columnar and trabeated structure in timber has artistic wooden brackets, floor bands and eaves boards which gives an insight to the plethora of Indian flora, fauna, mythological creatures and deities in minutely detailed carvings. The characteristic feature of the Zanana Mahal is these wooden brackets, particularly those on the upper storey which are carved in form of winged musicians.

The beauty of the skillful craftsmanship is seen in continuation in the adjoining Purani haveli as well. The Purani haveli exists in ruins today for most of its part. Some old documentation records and the onsite scattered fragments show that it was a double storey structure in brick and woodwork. The remains of few upright columns and jharokhas stand as a testimony to the skill of the Gujarati craftsman.

Over the decades, the functionality of many spaces within the palace complex has changed. Some activities have even become redundant. For instance, the two courtyards were the center of all the hustle and bustle of activities in earlier days. The main courtyard of Sajjan Vilas palace was a formal gathering space whereas the courtyard of Zanana Mahal must be a witness to numerous gossips and giggles, playground for royal children where the mothers and maids could keep an eye on them. Although a good number of these traditional gatherings are a thing of the past, the physical existence of these places continues to stand tall as living witnesses of the former cultural trends. It acts as a window for the future generations to envisage the vintage ethos that was an indispensible part of Indian history.

The Darbargarh Palace Complex is a living heritage, which serves as the residence of the royal family even today.  Historically, it is a witness to the bygone era of the Indian royalties, which marks an irreversible period of Indian history. The spatial configuration of the palace complex and the amalgamation of varied architectural styles make a statement even in present day context. Architecturally, the eclectic mix of European and Gujarati elements creates a diversified composition. Although, these different architectural elements have been incorporated in different time periods, it maintains a striking balance in the overall scheme of the palace complex. It evokes a sense of unpredictability throughout the palace. The palace has undergone some timely changes yet nothing has drastically altered the sanctity of the site. 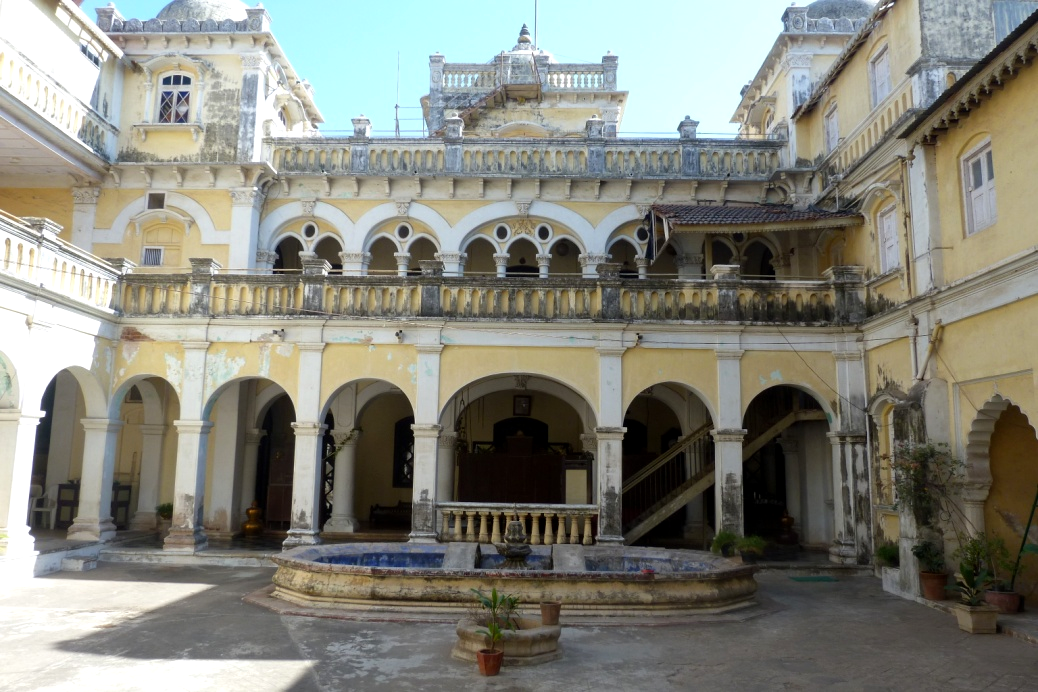 To this day, a visit to Darbargarh Palace complex has the potential to transcend a person in the past glory where one can get an insight of the royal life and entourage. And this very experience in form of intangible heritage has the capacity to immortalize our history in the minds of the masses.

About the Authors: Neha Raje and Swapnil S. Bhole are practicing architects from Mumbai. They have been passionately involved in various research projects and have chosen this as one of the mainstream career goals alongside working on various interesting architectural and interior projects. They have done extensive documentation of palaces in Gujarat and have been doing research in Himachal Pradesh. Till date have documented around 30 villages including temples, forts, palaces and residences.  They are also involved in teaching at Architectural institutes, delivering guest lectures, thus contributing with knowledge and ideas at the grass root level towards paths less chosen. Overtourism In Manali – Reality or Myth?