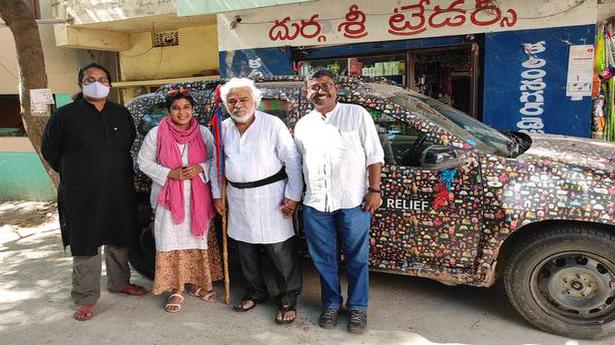 Neha Chaturvedi, Ahmer Siddiqui and Siddhartha Dutta are on a 25,000-kilometre road trip, in their custom-modified car that doubles up as a home and studio. They began their journey in New Delhi on October 4 and drove along India’s borders to document the impact of COVID-19 on people. The trio was in Hyderabad on Deepavali and met poet Gaddar, and members of not-for-profit organisations who helped with relief work during the recent floods in Hyderabad.

The trio then resumed their journey towards Nellore, Chennai and along the coast to Kerala, Konkan region, Kutch, Rajasthan and ahead.

The journey was the idea of Ahmer and Siddhartha who have been liaising with not-for-profit organisations. However, they reiterate that this journey was taken up independent of any organisation. “We listen to what people have to say about the lockdown and the impact it had on them. We encourage anyone eager to help to do their bit locally. If they contribute through us, the funds will be handed over to Rise Against Hunger India,” says Ahmer.

They needed someone to document the observations as videos to be uploaded on social media and later culminating in a documentary. Agra-based artist and documentary filmmaker Neha came on board.

Elaborating on the name Road Ashram, Ahmer says. “Since we travel, learn, educate by spreading awareness and do so much from this space, we call the car and this trip Road Ashram,” he says.

The car exteriors are dotted with iconography that represents varied aspects of India, and it becomes a conversation starter wherever they halt.

All through their journey, they spoke to people on the streets, well-known personalities in State capitals to get different perspectives of the pandemic: “We are focusing on the humanitarian aspects – loss of jobs, malnutrition, child marriages, education and more,” says Neha.

In a remote Arunachal Pradesh village where people travel 50 kilometres to make a phone call owing to poor connectivity, they point out that online education is unthinkable. In the Sunderbans, they heard fisherfolk lament that fishing had been banned during the lockdown, stripping down their source of income. “Ours is a vast country where one solution doesn’t work for everyone,” Ahmer points out.

Ahmer drives while Siddiqui handles the planning and operations, also deciding where to stop for the best local food. “We have managed well so far,” says Siddiqui. To cope with the rigours of the journey, they do stretching and breathing exercises.

Tips for Traveling Greece with Covid-19 Restrictions • The Blonde Abroad