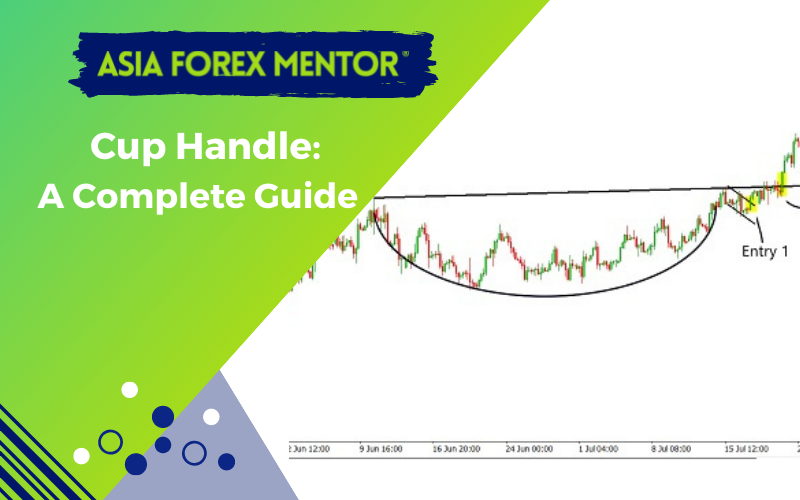 A cup and handle price pattern on a security’s price chart is a technical indicator that resembles a cup with a handle, where the cup is in the shape of a “u” and the handle has a slight downward drift. The cup and handle is considered a bullish signal, with the right-hand side of the pattern typically experiencing lower trading volume. However, there are exceptions to the shape of the cup and handle as well. Depending on the market situation, the cup can take the form of a “V” shape and the handle, usually a downward channel, can also take the form of a triangle at times.

The cup handle is a trend continuation pattern that serves as a period of consolidation before the trend continues in its original direction. Since the cup handle consists of two primary patterns, mainly the cup and the channel, or triangle, it provides two potential entries for traders to trade. However, in this article, we will be only looking at one entry point, the entry right after price breaks out of the handle.

Different Types Of Cups And Handles

As written in the introduction, the cup and handle forex patterns can vary in shapes. As for the cup, it commonly takes the shape of a “U”, but it may at times take the shape of a “V” as well. The difference between these two shapes is that the more rounded “U” shape cup indicates a consolidation period, whereas the sharper “V” shape cup indicates a sharper reversal towards the trend continuation. A rounded cup often also takes a longer time to form as compared to its “V” shaped relative. The handles of the cup handle pattern too, varies from triangles to price channels of different gradients. However, the differences are far more significant.

As for the profit taking level, it can be determined by the amount of pips from the resistance line at the rim of the cup to the base of the cup, in other words the depth. The amount of pips is then traced and tracked from the top trend line of the handle from the point of the break out candle.

The Cup handle pattern strategy allows the trader to be trading with the trend since it is a trend continuation pattern which renders a higher win rate. On top of that, the strategy gives 2 potential entry points for the trader, essentially providing a back up plan in case he mises the first, or maybe allowing a more aggressive trading plan that consists of both of the entries. To top that off, the gradient of the handle of the cup handle pattern also provides valuable information on the strength of the break out.

This allows to utilise the information and aids in the planning of the trades that he is going to take. However, this pattern strategy definitely does not occur often, more especially in the higher time frames which have a higher probability of winning. In addition, the cup handle pattern is very subjective to identification since the cups and handles can vary in shape. This uncertainty and lack of confirmation will be the greatest weakness of all chart patterns including this one.